Since 1997 a consortium led by RDC has been working to create the first regional integrated port/railway transportation system for Malawi, Mozambique and Zambia.  In January 1999, the consortium negotiated a Memorandum of Understanding with CFM (Mozambique's Port and Railway Administration) to concession Mozambique's Nacala Port and Railway, which comprises 872 km of trackage to Lichinga and the Malawi border in addition to port facilities.

On January 10, 2005, the second phase of the concession was completed, and Corredor de Desenvolvimento do Norte, S.A.R.L. ("CDN") (English translation: the North Development Corridor) began to rehabilitate and manage the Nacala Corridor for a 15-year concession.

The Nacala Corridor consists of the Port of Nacala in Mozambique, the Northern Railway network of Mozambique, and the railway system of Malawi (CEAR).

The project included the rehabilitation of the 77-km section of the line between Cuamba and the border with Malawi at Entre Lagos, infrastructure improvements for Malawi to improve drainage and reduce line interruptions during the annual rains, as well as refurbish the largest natural deep-water port on the east African coast - the Port of Nacala.

The U.S. Overseas Private Investment Corporation (OPIC) provided US$29.6 million of financing for the project.The consortium included: ERL (Bermuda) and RDC as foreign investors, along with MANICA (Mozambique), Mozambican private investors and CFM. 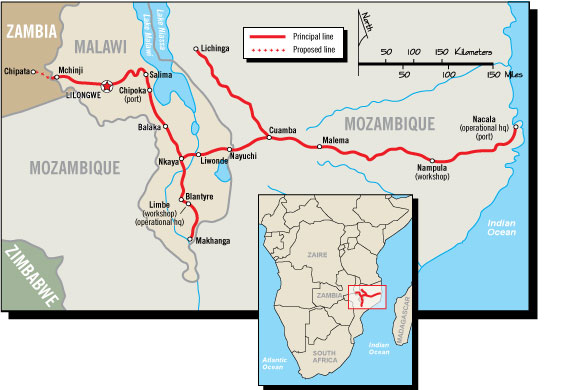